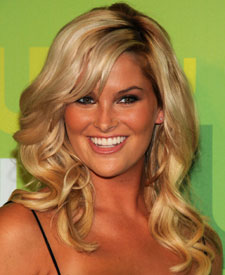 Fierce, fabulous, and full-figured! "Extra" met up with Whitney Thompson, the cycle 10 winner of "America's Next Top Model," who is trailblazing the catwalk as the show's first plus-sized winner! The win nabbed by Thompson may surprise her, but she'll make a fine role model.

After sharing a bonding moment with supermodel hostess Tyra Banks after the "Top Model's" win, Whitney said of Tyra, "She feels left out because sometimes she looks at what other people consider beauty -- and sees that's not really her cookie cutter mold, and I think it really hurts her -- we both started crying." Thompson then added, "I was raised in the south where it's a good thing to have a butt and breasts."

Don't expect stardom to go to Whitney's head -- the new role model plans to stay away from the rocky path taken by troubled Hollywood It girls! "You're not going to see me walking around town with no panties or getting DUIs or in rehab," laughed Thompson.