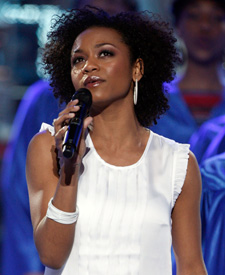 It's down to the two Davids -- as the battle for the title of "American Idol" moves into its final week. Syesha Mercado was voted out, leaving rocker David Cook, a bartender, and David Archuleta, the baby-faced 17-year-old from Utah -- and leaving Mercado to perform the Alicia Keys hit, "If I Ain't Got You" as her final "AI" ballad.

"I don't know what to say," Mercado said after learning her fate, "I just want to say thank you." She left the stage smiling, after going so far in the competition and falling into the bottom two a number of times, it was no surprise that it was Syesha's turn to sing her swan song.

On Tuesday, she left the judges less than impressed with her rendition of Peggy Lee's "Fever," prompting even the notoriously forgiving Paula to say, "I don't know if it's going to be good enough to get into the finals.

Tune into FOX next week as the Davids battle it out -- and one nabs the title of "American Idol!"