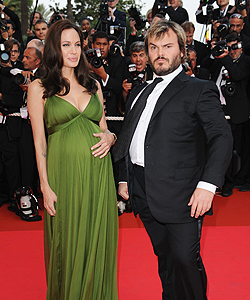 "Extra" is firing up the south of France! The 2008 Cannes Film Festival red carpet kicks off as Hollywood's finest walk those famous steps -- but one Tinseltown twosome stood out. All eyes were on Angelina Jolie, who stunned everyone in an emerald green maternity dress before breaking news on the ever-expanding Brangie Bunch!

At the "Kung Fu Panda" presser, Angie joked about co-star Jack Black outing her news about expecting twins. The funnyman accidentally confirmed the rumor during a "Today" show interview.

When asked if she was expecting two babies, Jolie smiled, saying, "Yeah -- we've confirmed that already. Well, Jack confirmed it actually." Angie's August 19th due date also came through the courtesy of another co-star -- Dustin Hoffman!

"Kung Fu Panda" karate chops into theatres June 6th. Tune into "Extra" for plenty more partying to come from Cannes, aboard "Extra's" Bud Light yacht -- the place to be!