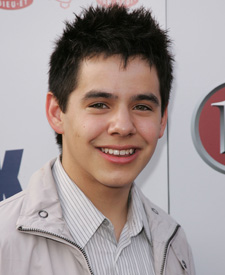 David Archuleta's father Jeff has been barred from backstage at "American Idol" -- and now the 17-year-old "Idol" hopeful is standing up for his father!

"I've heard some weird things that people have been saying, and it's kind of a bummer," David told the new issue of TV Guide, reports Us Weekly. "I think I, of all people, would know what's going on, and he's been great."

It began circulating that the older Archuleta was an overbearing stage father, after reports surfaced of Jeff withholding water from David during recording sessions -- a report that David insists, "is kind of stupid."

"I'm 17!" young Archuleta exclaimed, "I think I'd be able to stand up for myself if he were to take my water away."

David continues the fight for the "Idol" crown this week, as he battles against the other two contestants left standing -- Syesha Mercado and David Cook.