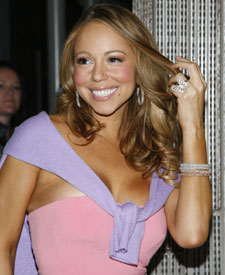 The "Touch My Body" diva dished about one particular desire as Mrs. Nick Cannon -- the urge to start a family with her new hubby. When Ellen asked about wanting kids, Carey responded, "Yes."

Mimi also delved into the intimate details of her top-secret nuptials in the Bahamas. As to the guest list; she kept it simple. "Mainly it was people that were there to do my hair and help me with the dress, and then three of my friends," shared Carey. Since the couple kept the ceremony small, they've decided to do it again -- every year! "Instead of trying to be like, 'you're invited but don't tell anybody, we're just going to have another one next year," said Mariah.

The celebration wouldn't be complete without gifts for both the birthday girl and the bride! While Mariah slipped Ellen something sexy, the talk show funnywoman gave Carey something no newlywed should be without -- a gravy boat!