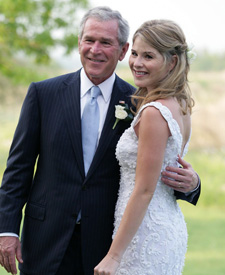 From the four-tier wedding cake and the hit that made President Bush get up and boogie -- "Extra" has all the "I do" details, including the intimate first photos from first daughter Jenna Bush's ultra-private wedding!

"Our little girl Jenna married a really good guy, Henry Hager," says George W., "the wedding was... spectacular... all we could have hoped for."

Jenna and Henry exchanged vows before a new limestone cross that will remain at the Bush ranch in Crawford, Texas. Houston Reverend Kirby John Caldwell presided over the American royal wedding -- even though he's a Barack Obama supporter -- and the pastor dished to a Houston TV station that the father-of-the-bride cried!

People magazine's Betsy Gleick reports that the bride wore an embroidered white organza gown designed by family friend Oscar de la Renta, while the men kept it casual in suits rather than black tie. As for the honeymoon plans -- "They're going to Europe," says Gleick, "they're keeping everything super private."

Jenna is a Bush no longer -- the first bride will now go by Jenna Hager. She and new hubby Henry will begin their happily ever after in a recently purchased $440K townhouse in Baltimore.