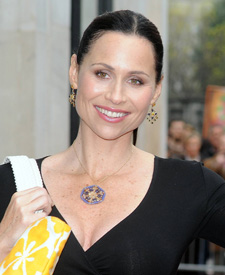 Who's the daddy? That's the question asked of Minnie Driver since she announced her pregnancy -- and now she's dropping some hints.
The mystery man is "sort of in the same business," she told U.K.'s Independent, adding that he's English.

The baby daddy is not, however, San Francisco musician Craig Zolezzi. Despite reports speculating he's the pop, Minnie, 38, insists, "Craig's not the dad! He's my great friend and he's been so cool about it."

Minnie's mini-me is due this summer.