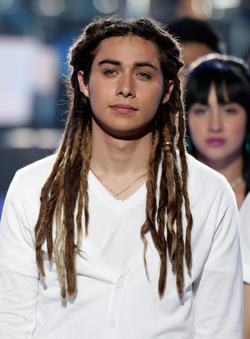 His flashing eyes and winning smile couldn't save him this week -- Jason Castro is the latest "Idol" hopeful to be sent packing. The 20-year-old Texan attempted songs by Bob Marley and Bob Dylan this week, falling well short of expectations by forgetting lyrics to "Mr. Tambourine Man" -- which earned him rough reviews from the judges. After Castro's rendition of "I Shot the Sheriff," a baffled Simon said, "I don't know what you're thinking!"

Castro, known for being good-natured, took the ax in stride. As he stood in the final two with Syesha Mercado, he quipped, "Somebody told me that I shot the Tambourine Man yesterday."

The dreadlocked crooner blamed nerves for Wednesday's poor performance, saying, "It's just getting tough for me. I think my inexperience is coming in."