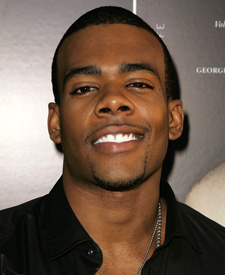 In a shocking "Dancing with the Stars" elimination last night, 21-year-old R&B sensation Mario got the boot. Although he's the youngest celebrity to star on "Dancing," he took the news of his elimination with maturity -- even thanking judge Len Goodman, his toughest critic since day one!

After thanking the audience, Mario said, "Len, thank you for all the comments you made -- ultimately, you helped me become a better ballroom dancer. The comment about me being an inspiration to young people, I want to say that the real great ones are the young men and women fighting for our country... thank you guys."

Even though the lowest scores of the week belonged to Tony-winning Marissa Jaret Winokur, Mario found himself in the bottom two with NFL player Jason Taylor -- both former viewer favorites.

Four couples remain -- tune in to ABC next week for the semifinal.