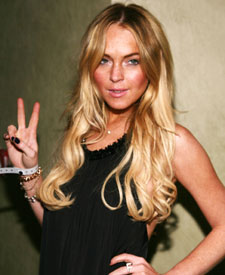 Things are getting "Ugly" for actress Lindsay Lohan -- a rep for ABC announced that the once wayward "Mean Girls" star will guest-star on the hit show, "Ugly Betty," Us Weekly reports.

Lohan will play Betty's (America Ferrera) high school friend in a series of flashbacks. An on-set source dishes, "Lindsay and America really hit it off!"

Lindsay, best known for her hard-partying antics and rehab stints, seems to be singing a new tune. The actress was ready to shoot on "Betty" from day one. "Lindsay arrived on set 45 minutes early," says a source.

The actress will appear in multiple episodes of the show, with the first show airing May 22.