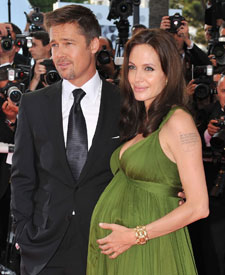 Power couple Brad Pitt and Angelina Jolie had a fun-filled weekend in France, starting with a helicopter ride on Saturday with 3-year-old daughter Zahara. Rumors are circulating that Angie will give birth to her fifth child while in France.

On Sunday, the entire Jolie-Pitt brood spent the day on a rocky beach near Bono's home in the South of France. The Jolie-Pitts were accompanied by U2 guitarist David Howell Evans, known as "The Edge," who took the kids to play by the water, while Angie and Brad rested nearby. "They're doing everything you and I might be doing," a source tells People, "eating, taking naps and swimming in the pool."

The expectant parents and their four children are staying in an historic St. Jean Cap Ferrat villa owned by Microsoft co-founder Paul Allen, just 15 minutes from Bono's home. They are spending the summer in France, with Jolie scheduled to walk the red carpet at Cannes Film Festival for her two films, "Kung Fu Panda" and "The Changeling."