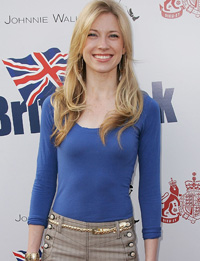 Brooke White wasn't able to make a "Believer" out of the any of the judges or fans -- and the delicate blonde singer was sent home from "American Idol" last night. White, who also sang Neil Diamond's "I Am, I Said," was alternately praised and criticized by the judges in recent weeks, culminating with a resounding thud when Simon called her rendition of "I'm a Believer" "a nightmare."

In the bottom two with Brooke was Syesha Mercado, the only remaining female contestant and now one of the final four. After Brooke's elimination was announced, Brooke couldn't contain her tears, but told fans that she was in "that happy, grateful mood," and added, "I just want to say 'thank you.'"

The night was full of surprises, including a call-in from Tara Miller, who caught Simon Cowell off-guard when she said that she was his first kiss from during their childhood in England!