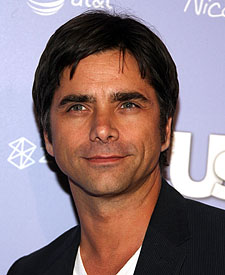 "Extra" is going behind the scenes of "ER" with sexy doc John Stamos! "Extra" host Dayna Devon plays doctor with the steamy star -- while she's on rumor control!

Is Stamos really taking his stethoscope to another set with an offer for a spin-off of the NBC hit series? No! John reveals that a spin-off part was "never offered, but there has been talk about that," adding, "I'm really having a great time doing the show and we're still cranking out good quality, so I think when they're done I'm ready to go off into the sunset."

John's character may have his hands full juggling a parade of on-screen girlfriends since joining the show full-time, but reveals that he was anything but the dream lover in a recent sex scene with co-star Linda Cardellini. "I bashed her in the nose, and I couldn't get her bra off," says the sex symbol, "She was like, 'I thought you'd be better at this!'"

Now John is looking to score again -- in the ratings -- when "E.R." returns with new episodes... tonight on NBC.