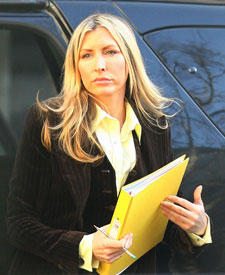 Heather Mills wanted more of Paul McCartney's cash, but she doesn't want to see more of him. The ex Beatle's ex is said to be fuming at recent pics of Sir Paul and his rumored current love, Nancy Shevell, vacationing in the Caribbean.

Mills, who won a colossal $50 million settlement, reportedly thinks Paul is flaunting his new love and celebrating his divorce in front of her. McCartney and Shevell, a New York Metropolitan Transportation Authority executive who is legally separated from her husband, were spotted frolicking seaside near Antigua this week -- and riding bikes around the swanky Jumby Bay resort.

Paul and Nancy were first spotted together last November. At the time, Heather told "Extra," "Paul is a free man and can do what he wants."