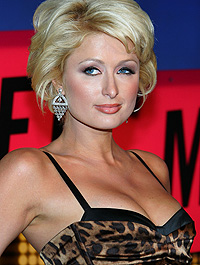 America's favorite socialite, Paris Hilton, caused quite a commotion at the Miss Turkey competition in Istanbul -- where she attempted to belly dance.

Miss Hilton, who has been trailing new boyfriend Benji Madden's his band Good Charlotte on their world tour, did a dizzying dance which consisted mostly of hair flips and spinning in circles. Stars are rhythmless!

There was nearly a paparazzi riot as Paris arrived at Istanbul airport as they tried to get shots of the "Hottie and the Nottie" star. The heiress was unharmed.

Stars Who Have Admitted to Having Plastic Surgery 8

O.J. Simpson’s Kids Spotted in the Days Following His Release from… 10