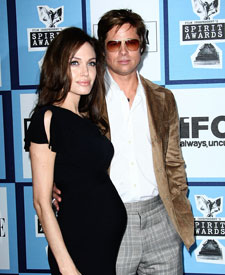 How much would pictures of Angelina Jolie's baby (or babies) sell for? Try a whopping $10 million! That's the estimate of The New York Post today after speculation about how much magazines might pay for pics of the next perfect tots.

"It's become big business now," National Enquirer Executive Editor Barry Levine told the Post. "It's outrageous. They've gotten very sophisticated. The rights are bought up now even before the celeb enters the hospital. They hire extra security so it's impossible to obtain a photo illegally."

American Media Editorial Director Bonnie Fuller said, "If J.Lo really did get $6 million, then I think Angelina can now command $8 million," adding that magazines look at massive payouts "as a long-term investment."