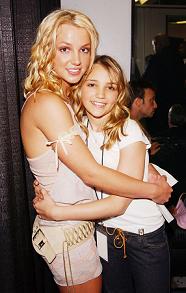 Nickelodeon's pregnant "Zoey 101" star Jamie Lynn Spears probably won't be attending this weekend's Kids' Choice Awards (for reasons more obvious by the month), but is she sending big sis Brit in her place?

Rumors are circulating in Hollywood that the constantly monitored Britney will make an appearance on Nickelodeon's orange carpet this Saturday, and reports are fueled by this past week's sightings of Brit at a Hollywood rehearsal studio.