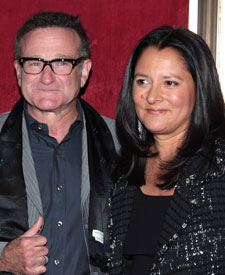 Robin met Marsha when she was a nanny to his young son during his marriage to Valerie Velardi, to whom he was married for 10 years. Robin and Marsha have two children together, Zelda and Cody.

Marsha went on to serve as a producer on some of Robin's biggest hits, including "Mrs. Doubtfire" and "Patch Adams." She's seeking spousal support as well as physical custody of Cody. The couple filed for separation on December 31, 2007.