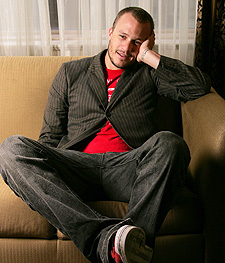 Heath Ledger's family is still at odds over his fortune -- and now Michelle Williams' father is publicly skeptical about the money. "It's real simple: just come clean with everything,'' Larry Williams told Australia's The Daily Telegraph. Larry says he was left scratching his head when documents were filed in a New York court listing Heath's assets at just $145,000. "I have no idea what Heath Ledger was worth (but) they certainly haven't stated all of the assets to the court," he said.

Heath's family said his assets included a Toyota Prius worth $20,000, furniture and fixtures worth $20,000, and $100,000 in various bank accounts. Heath's will, written before his relationship with Williams and the birth of daughter Matilda, names his parents and sisters as the only beneficiaries -- though the family insists Matilda will be taken care of. Still, Larry says that the Ledger family didn't "sit down and sort this all out" with Michelle and her lawyers.

Heath died January 22 of an accidental overdose of prescription medications.