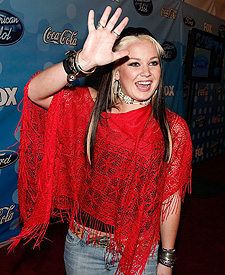 Wild-haired, motorcycle-drivin' rocker Amanda Overmyer was kicked off "American Idol" last night, leaving the remaining ten contestants to fight for the crown. "It's been a run," she told Ryan Seacrest. "[Being] number 11 out of all them people was more than I could ever expect."

Overymyer, 23, was in the bottom three with struggling country singer Kristy Lee Cook and Carly Smithson, but after a performance of "Back in the USSR" that failed to connect with the judges, Idol voters agreed. Ryan called the former nurse "one of the most fearless contestants we have ever had," but when he asked Simon Cowell if he agreed that Amanda should be gone, he said, "Yes." Simon has also pegged Kristy as the next to go, calling her "like musical wallpaper, insomuch as you notice it, but you can't remember it."

The remaining contestants will go on the "American Idol" tour after a winner is chosen.