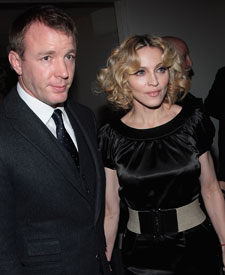 Madonna and Guy Ritchie are not calling it quits, insists the Material Girl's rep, and rumors to the contrary simply aren't true. "I am delighted to confirm that Mr. and Mrs. Guy Ritchie remain happily married," the rep said in a statement, justifying their love.

Rumors have swirled for months that the two were having marriage trouble, and when Guy didn't show for Madge's induction into the Rock and Roll Hall of Fame in New York last week, British tabloids screamed that the end was near.

But Madonna's rep insists Guy's no beautiful stranger -- they've simply been living in different countries as she promotes her upcoming album "Hard Candy" and he finishes up his film "RocknRolla." "All is well and wonderful in the Ritchie household," added the rep.

Win It! A Philip B. Hair + Scalp Treatment 2

Win It! A Reel Stories, Real Lives Gift Bag 10 5 Things You Need to Know Before You Get Your Nose Done, by Dr. Raj…