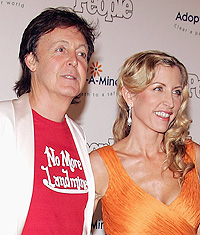 Mills allegedly poured a glass of water over attorney Fiona Shackleton's head, leaving "everyone stunned," reports London's Daily Mirror, whose front page read "Wet It Be." Heather later told the BBC that Shackleton had been "baptized in court."

After the alleged soaking, Mills appeared on the steps of the High Court in London and said she was "very, very pleased" with her nearly $50 million settlement.