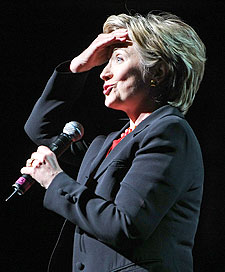 First she had the endorsement of film legend Jack Nicholson - now Hillary Clinton has the backing of rock legend Elton John!

The pop icon said he will give a solo concert at New York's Radio City Music Hall next month to benefit Hillary's presidential campaign, saying in a statement, "I'm not a politician but I believe in the work that Hillary Clinton does."

Tickets for the April 9 concert "Elton and Hillary: One Night Only" go on sale Wednesday, with prices starting at $125 and going as high as $250.