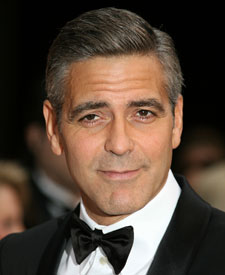 There were rumors that George Clooney would be putting on his scrubs one more time for "E.R.," but George is telling "Extra" he has no plans to return to the NBC drama. "The truth of the matter is they wouldn't ask, and there really would be no reason for it."

Clooney is focused on his football comedy "Leatherheads," starring Renée Zellweger and John Krasinski. As the director and star of the film, which hits theaters April 14, George took some major hits. "There were a couple of really dumb moments," he explained. "The first day I just got laid out by a young kid... and I've got four more months of this! So then I put out a rule: don't hit the director."

George's orders didn't keep Renée and John from taking some off-the-field shots at the man behind the camera. "He's much better as a boss than as a friend, that's for sure. Hack!" Renée joked. Added John, "He's the worst. He is just the worst. As far as the camera goes, you usually want to point it towards the actors."

Still, Renée told "Extra" she's just lucky to be in the film. "He lost a bet," Renée said about being cast. "Pool. It was pool!" George teased, "The truth was there were so many other actresses I wanted to hire, but I did lose."