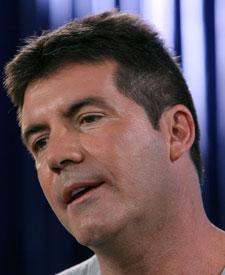 "Extra's" own Terri Seymour sat down with "American Idol" judge Simon Cowell in an exclusive interview, and the critical wit dishes about plastic surgery, Paula Abdul's reported engagement and what triggered his recent weight loss.

Is Simon as mean as some people think he is? Simon says, "Brits are like that, we're not mean, we're just sarcastic." Cowell's Brit buddy, hypnotist Paul McKenna, joined the duo to talk about the debut of his new weight loss TV show, saying, "I can help you lose weight and stop the emotional eating... there's never been a TV show likes this before." While Cowell wasn't hypnotized by Paul, he revealed, "When you see yourself on camera and you put on weight, you start thinking about losing it for sure."

As to why Simon didn't ask McKenna for help to quit smoking, Simon says it's because he knew McKenna would stop him, admitting, "I love it!" In response to reports that Paula is engaged to restaurant owner J.T Torregiani, Simon rolled his eyes, quipping, "Seriously... makes me sad I'm not J.T!"

And don't expect Simon to show any love for going under the knife either. "Men shouldn't, no. Just doesn't look right... name one person, one guy who's had plastic surgery and looks good?

Can you name one?