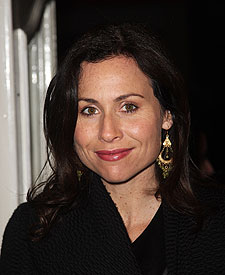 Minnie Driver has a mini bun in the oven! The curly-haired actress confirmed the baby news in a surprise reveal to Jay Leno last night -- after Jay pointed out her growing tummy. "Are you calling me fat?" she joked.

Minnie, 38, didn't reveal the father's identity. While she said she loves being pregnant -- there's one thing she could do without. "I don't know why they call it morning sickness," she said. "I am sick morning, noon and night, but it's a fair trade-off."

This will be the first child for "The Riches" star, who was previously linked to Josh Brolin (they broke it off in 2001), and more recently to magician Criss Angel.

Win It! A Philip B. Hair + Scalp Treatment 2

Win It! A Reel Stories, Real Lives Gift Bag 10 5 Things You Need to Know Before You Get Your Nose Done, by Dr. Raj…