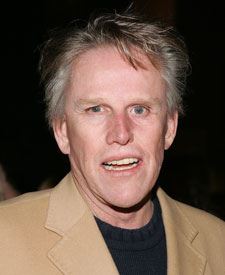 Gary Busey visited "Extra" and offered an apology to Jennifer Garner and Ryan Seacrest after nearly accosting the starlet during a red carpet Oscar interview and landing a sloppy kiss on her neck. Busey then reached out to his friend and former co-star, Patrick Swayze, who is in treatment for pancreatic cancer.

About that wacky attack on Garner, Busey told "Extra" he was sorry for interrupting the interview, saying, "I got very excited and I did not know Ryan Seacrest was doing an interview... I apologized to Jennifer, I apologized to Ben [Affleck], I apologized to Ryan." Wow, that's a lot of 'I'm sorrys!'

But Gary wasn't finished, as he also voiced his remorse for being hostile toward an 11-year-old web reporter at an Oscar after-party, saying, "I apologize. I would love to meet her again and pay attention to her and give her my heart instead of running away."

At the end of the interview, Gary spoke directly to "Extra's" cameras, sending a heartfelt message to Swayze, saying, "If you can talk me into going skydiving, you can beat this cancer."