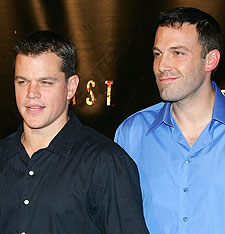 How would you sell a candidate who's already doing a pretty good job of selling himself? Ben Affleck, Matt Damon and John Legend joined forces today with MoveOn.org in announcing a new contest for Barack Obama's presidential campaign. "Obama in 30 Seconds" asks submissions of clips showing what inspires people about his candidacy. The winner's ad will run on national TV and they'll receive a $20,000 gift certificate toward filmmaking equipment. Sweet!

The ads will be judged by a celeb panel, including director Oliver Stone, mogul Russell Simmons, actor Adrien Grenier and others. Grammy-winning musician John Legend said, "I think this contest is a powerful way for ordinary citizens to be involved in an extraordinary moment in our history." Affleck and Damon have some experience backing filmmaker wannabes, as the Oscar winners produced the HBO reality series, "Project Greenlight" in 2005. Affleck says the contest is "a chance for everyone -- from aspiring filmmakers to armchair pundits, to raise their voices to put Obama over the top and help make history."

This Hollywood foray comes on the heels of another star-studded Obama project, the "Yes We Can" music video, featuring A-listers will.i.am and Scarlett Johansson.