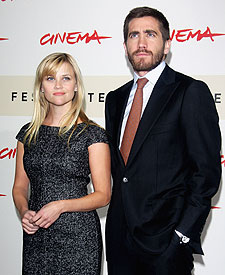 Hollywood’s under-the-radar couple, Jake Gyllenhaal and Reese Witherspoon were spotted doing some design shopping in Japan last week, with OK! magazine reporting that the two may be planning to share a place – or do they already?

OK! said the twosome were seen in Osaka, perusing the home design section of Japanese department store Takashimaya. An inside source told OK! that Jake’s big sis, Maggie Gyllenhaal, bought them subscriptions to interior design rags Blueprint and Domino, saying, "Maggie talked to Jake to make sure Reese would use them. He should get a say in how Reese decorates her place since he spends so much time there!"

Jake and Reese returned to L.A, where Jake was seen with a mystery ankle cast. The two were cozying up with a latte at the trendy farmer’s market in Pacific Palisades.

Reese has two children from her marriage to Ryan Phillippe, which ended in 2007. She reportedly commands a cool $15 mil for her films. Jake has never been married.