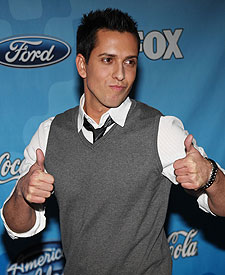 "American Idol's" most controversial contestant this season, former stripper David Hernandez, got the boot last night after his performance of "I Saw Her Standing There" failed to please audiences. Back to dancing for dollars?

David Archuleta was spared, even though he forgot the words to "We Can Work It Out," which Simon called "a mess." Kristy Lee Cook, who many thought would see her last day after a jangly country version of "Eight Days a Week," also stayed on board.

This is the second week in a row that a contestant with a troublesome past has been voted off the songfest. Last week, Danny Noriega was shown the door after a questionable MySpace video rant of his was widely circulated.