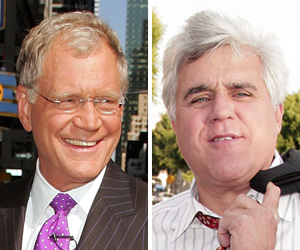 Frisky New York Governor Eliot Spitzer took a beating on late night television as hosts from David Letterman to Conan O'Brien took aim at his alleged involvement in a prostitution ring. "Get out of office," Letterman said as the audience erupted in applause. "Who is running the state, for the love of God?" Dave also took jabs at Spitzer’s wife Silda, asking, "How long does that need to last by the way? I mean wouldn’t you – if you were his wife, wouldn’t you be on the first train out of here? Just adios, get the kids, take a hike."

Conan O’Brien also took some below-the-belt punches, joking that Spitzer "likes businesses where you charge by the hour and screw your clients." On the west coast, Leno quipped, "Politics is the only profession where the wife of a man caught with a prostitute has to stand by his side. If this guy was a plumber, he’d have his wife’s SUV tire tracks over his head."