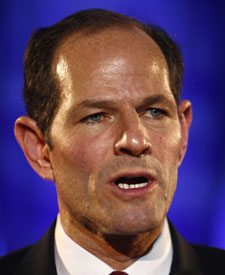 Disgraced New York Governor Eliot Spitzer resigned today after a salacious sex scandal that made waves across the nation, announcing, "The remorse I feel will always be with me and words cannot describe how grateful I am for the love and compassion they have shown me." He also promised to "atone for my private failings."

Now Julianne Moore is speaking out about the fall from grace, telling People, "I'm really pissed. I honestly don't care where or how people have sex, or with whom, but prostitution is illegal." She adds that the scandal is "a f---ing embarrassment." Literally!

The governor was allegedly involved in a high-end prostitution ring that’s now part of a federal, er, probe. An affidavit revealed that "Client 9," widely believed to be Spitzer, spent more than $15,000 on several prostitutes. The New York Post claims that Spitzer has been hooked for the last ten years, and has spent up to $80,000 on prostitutes, and that he prefers not to wear a condom when having sex. Not exactly role model material.