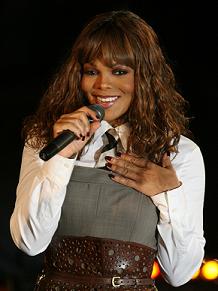 After being hospitalized with the flu on Monday, Janet Jackson cancelled her scheduled appearance on "Saturday Night Live." Nasty!

Janet's rep confirmed the cancellation, saying that Jackson, 41, is resting. No replacement has been announced. Janet has been forced to cancel various promotional appearances, including a party celebrating her latest CD "Discipline," which hit #1 on the Billboard charts.