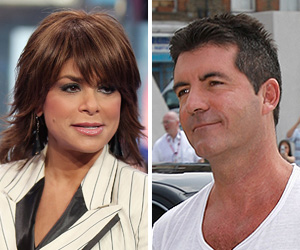 Paula Abdul wants the world to know that she's not drunk - just a little distracted. The loopy "American Idol" judge told David Letterman last night that Simon Cowell is the reason for her bizarre antics.

Simon was up to no good last week while Brooke White sang "Love is a Battlefield," says Paula, "He was whispering in my ear that 'Love is a Battlefield' was a yogurt commercial. Now everyone knows he whispers in my ear all the time." Dave then went straight up with Paula on accusations that she's frequently tipsy on camera, asking, "Are you drunk?" Paula shot back, "That's not cool!"

Meanwhile, "Idol" hopefuls will be vying for attention tonight as the top 12 start the big singoff. The two-hour show has former stripper David Hernandez in shock. "Can you pinch me?" he asked "Extra." One would think he's had enough of being pinched!

Which "Idol" would make your dreams come true? Tell "Extra" who your top pick is for tonight's performances.