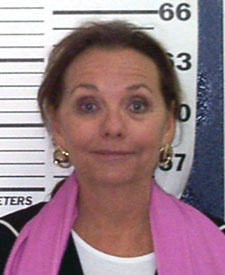 One of the shipwrecked "Gilligan’s Island" stars apparently likes to get wrecked once in a while. Dawn Wells was booked and cuffed at Teton County Jail in Wyoming last October 18 on possession of marijuana charges, after she was seen driving recklessly on a highway -- reportedly on the way home from her 69th birthday party. She was sentenced Feb. 29 to five days in jail, fined $410.50 and given probation after pleading guilty to one count of reckless driving.

According to a police report filed by Deputy Joseph Gutierrez, the rerun queen was pulled over after swerving over highway lines and repeatedly slowing and speeding up. A search party found four half-smoked joints in Dawn’s car, and she failed a sobriety test and was taken to the station.

Wells was sentenced to three misdemeanor counts; driving under the influence, possession of drug paraphernalia and possession of a controlled substance. As part of a plea agreement, she will serve five days in jail and six months of unsupervised probation for one count of reckless driving. Wells’ attorney argued that she was swerving on the road because she was trying to find the heater controls in her car. Yeah, or a lighter.