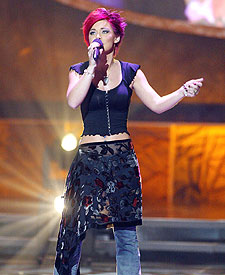 After last month's breakdown that landed her in a psych ward, which she attributes to "a bad reaction from pain medication for a broken foot," former "Idol" Nikki McKibbin is reaching out to David Hernandez, telling the AP he should have "no regrets" about his stripping past.

McKibbin, who placed third in season one of "Idol," said she was honest with producers about her past, and that when asked before the competition if she had any professional dance experience, she wrote, "Yes – exotic" on the application. Nikki worked as a stripper for five or six months prior to the show.

McKibbin told AP re Hernandez, "He did what he did for a reason, whether he loved what he was doing or he needed the money." Photos of David serving drinks at a gay nightclub splashed across the web last week. McKibbin, now a married mother of two, added that her "breakdown" in Fort Worth has been "blown out of proportion," and insists that she was never thinking of committing suicide.