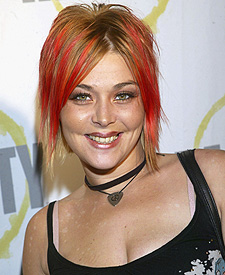 First season "American Idol" contestant Nikki McKibbin is blasting reports she attempted suicide -- insisting she broke her foot and had a bad reaction to pain medication. "Nikki did not attempt suicide nor does she have any plans on doing so!" her rep told "Extra."

Star magazine reported last week that Nikki was undergoing a psychiatric evaluation after trying to take her own life. Nikki’s reasoning, according to the report, was to live with her recently deceased mother "in heaven," a tale that her rep also denies. "Nikki was indeed close to her mom, we were all extremely affected by her loss, however, Nikki loves life and understands how important it is, not only to her family and friends but to herself as well."

As for the 72-hour psychiatric observation?

"Nikki felt that she didn't need to go to a hospital so she refused to go with the ambulance," the rep explained. "Apparently the police stepped in and decided that it was in Nikki's best interest to go to the hospital so they took her. If the police take you, psychiatric observation is mandatory!"