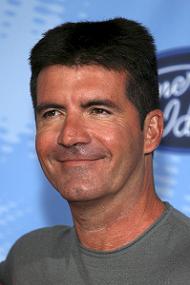 "Idol" big wheel Simon Cowell was seen scooting around L.A. in his hot new ride -- the priciest and fastest car legal for the streets - a Bugatti Veyron, which retails for a paltry $1.2 million. That's a lot of judging!

The car-loving music mogul reportedly bought the beast last October, says the Daily Mail, "in a car-buying splurge" in which he also plunked down around half a mil for a Rolls-Royce Phantom -- which was later featured in an episode of "Punk'd" -- when a valet parker pretended to crash it! (It was a dummy car, not Simon's.) The hotrod judge is said to be worth $100 million, and in addition to the Rolls, he owns a Ferrari and intends to pick up the new Rolls 100EX Cabriolet.

But according to an interview with Top Gear magazine, Cowell likes the Phantom best. "It's the most beautiful, most comfortable, best-engineered car ever built. I can hardly bring myself to say it but it's -- oh, sod it! -- perfect."

Clearly, Simon's had the most success of anyone on "Idol" so far

Chris Harrison Says What Went Down on ‘The Bachelorette’ Was… 10