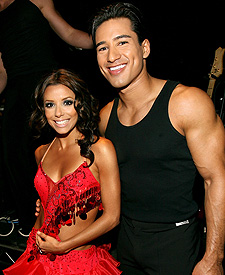 "Extra’s" own Mario Lopez is Broadway bound! The dancing hunk has signed to appear in the revival of "A Chorus Line," and he’s talking exclusively to "Extra" about his new project.

Lopez admits something’s held him back from taking a stab at the New York stage; a certain voice of reason made him take a two-step back. Says the host, "I had been approached to do Broadway before. They asked me for ‘The Producers’ and ‘Chicago’ but the crazy thing is I can’t really sing. I can do it in Koreatown at the karaoke bars… I sound like Elvis there."

Lopez doesn’t have to worry, he won’t be singing along with the bouncing ball, and it appears that his character doesn’t sing either! He laughs, "Everyone sings and dances except for the character I play, Zach… he doesn’t necessarily have to sing, that’s my guy!"

And Mario was Eva Longoria's guy today as X17online.com spotted the future Broadway dancer doting on the starlet with a Cartier necklace while lunching in L.A. The pair have been good buddies for a while, and X17 speculates that it may have been a good luck present for opening her very own Hollywood restaurant, Beso.