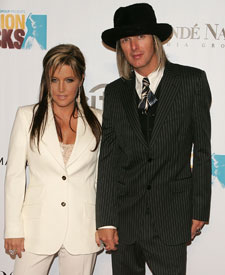 The rumor mill went into overdrive when Lisa Marie Presley, 40, was spotted at a fast food restaurant last week, sporting a much curvier figure, and now her rep has confirmed to People -- Elvis’ daughter is pregnant!

This is the third child for Presley, following daughter Riley, 18, and son Benjamin, 15, from a previous marriage (not to Michael Jackson). It is the first for Presley and new husband Michael Lockwood. The two tied the knot in 2006. Her rep tells People, "They are incredibly overjoyed."

Elvis Presley died thirty years ago in Memphis at age 42.