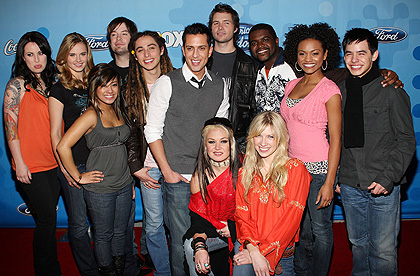 More than 36 million viewers voted for their favorite "American Idol" contestants last night -– and Luke Menard, Kady Malloy, Asia’h Epperson and Danny Noriega were all given the weepy boot. Noriega, this year’s sassy Sanjaya, cried under his bangs as he left the stage, but it came as no surprise since his singing wasn’t nearly as strong as his attitude.

Included in the top twelve are three powerhouse Davids – Cook, Archuleta and ex-stripper Hernandez, whose racy photos have been popping up all over the web. Then there’s Carly Smithson and wild-haired rocker Amanda Overmyer, who’ve also had their share of controversy. Producers learned early on that Carly had previously recorded an album, and Amanda was arrested for DUI in 2006. Nonetheless, the show gave the girls the go-ahead to compete, and they’ll sing against the other hopefuls next week.