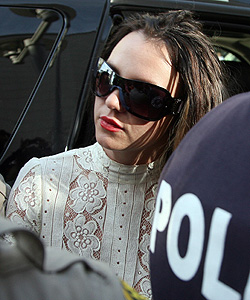 Jamie Spears will continue as conservator of daughter Britney’s estate for another four months, the courts decided yesterday.

Papa's control was set to expire March 10, but after a court hearing Wednesday, Jamie will look after his eldest daughter until July 31. This means Jamie will control Britney's access to credit cards, cars, friends -- and just about anything else he sees fit.

The conservatorship was enacted after a series of very public Britney meltdowns beginning in January. Since then, and after a visit to the psychiatric ward, it appears Britney’s life is slowly getting back together. She has had restored but limited visitation with with her two young boys, and she has been rehearsing and teaching dance classes for children in North Hollywood.

But now is Brit turning to Kabbalah to help ease her legal pain? X17 Online caught the pop star leaving Intermix store in L.A. yesterday holding a copy of the Zohar in her hand. X17 speculates that she's started practicing religion again to find her spiritual center.