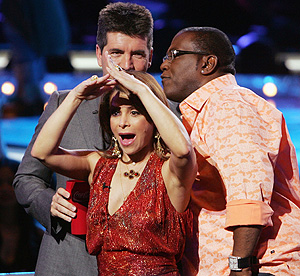 Last night the top eight "Idol" boys took center stage and breathed life into a music decade worth forgetting -- the 1980s. Even news that David Hernandez was a male stripper couldn't stop him from rocking the mic with "It's All Coming Back to Me Now." When it came time for the judges' reviews, however, David appeared a little more reserved onstage than in previous weeks.

True to form, David Archuleta was a crowd pleaser, singing Phil Collins' "Another Day in Paradise." But Simon Cowell said he's getting a little bit "gloomy" and needs to up the tempo to keep his fans going wild for him. Still, Cowell told the 17-year-old that he believes he'll make it to the final two.

Danny Noriega didn't get such a rave review from Mr. Nasty as he sang a modern rendition of "Tainted Love" and Simon called the entire performance "useless." Cowell's unkind words didn't seem to bother Danny -- he sassed him right back, "Whatever!" That's what everyone was thinking, Danny.

Other crowd favorites were rocker David Cook, who finally pleased the Sultan of Slams, and Jason Castro, whose confidence was rocked a bit because he didn't have his trusty guitar.

Now, will crowd favorite David Hernandez's stripper past affect your vote? Tell "Extra" if he should take the stage again next week.