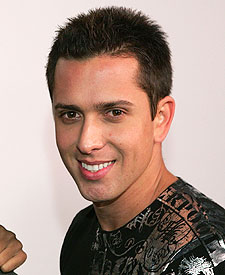 Looks like singing isn’t "American Idol" favorite David Hernandez’s only talent. Reports have surfaced that the charismatic contestant was a male stripper in Arizona until he landed a position on the show. A strip club manager told the AP that Hernandez, 24, worked at "Dick’s Cabaret" for three years, until September 2007, appearing completely nude and giving mostly male lap dances.

"He had the look and the type that people like," said manager Gordy Bryan. "So he made pretty good money here." Bryan also told the AP that he was aware David could carry a tune, but he never sang to any patrons at the club. Bryan believes David stopped working because of his participation in "Idol."

It’s not clear how this could affect his stint on "Idol." In 2003, Frenchie Davis was given the boot when it was revealed her picture appeared on an adult Web site.