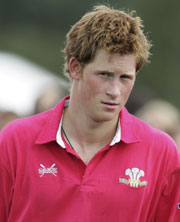 Prince Harry returned from the danger zone in Afghanistan, but he’s insisting he’s not a hero. "There were two injured guys who came back on the plane with us who were essentially comatose throughout the whole way. Those are the heroes," said the 23-year-old son of the late Princess Diana, as quoted by People.

The redheaded royal told reporters he never wanted to leave the frontline after just 10 weeks of duty, but now that he’s home, he admits that he couldn’t wait to get out of his fatigues and into his royal bubble – bath, that is.

"I suppose deep down inside it's quite nice looking forward to having a bath, so I think once I’ve had a bath I’ll think it's nice to be back early," said the cleanly prince.