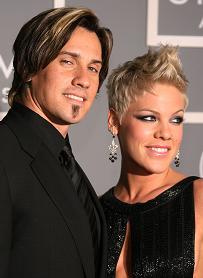 Pink’s publicist tells People magazine, "Pink and Carey Hart have separated. This decision was made by best friends with a huge amount of love and respect for one another. While the marriage is over, their friendship has never been stronger."

Rumors ran rampant when Pink did a recent photo shoot sans her wedding ring, and Hart was photographed in Las Vegas with an unknown brunette this past weekend.