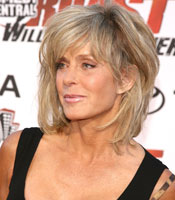 Farrah Fawcett is finally opening up about her cancer battle, giving only “Extra” a candid and emotional interview about her recovery.

“I’m doing well,” Farrah told “Extra” as she left a hospital in Santa Monica last night. “Never can say for sure. It’s ongoing.”

The “Charlie’s Angels” star received devastated news in May, when she learned her intestinal cancer had returned. Vowing to fight, Farrah flew to Germany for alternative treatment. Now Farrah is proving she’s still got her sense of humor intact!

“You know, it’s filled with Germans,” Farrah quipped when asked about her time there.

In a rare and raw confession, Farrah then revealed the toll her treatments have taken on her.

“I’ve been doing Pilates and weights,” she said.

She’s also got the support of longtime love Ryan O’Neal and fans around the world.

“You know, everybody says they are praying for me,” she said. “I have to get well – so many people are praying.”

Do you want to send your well-wishes to Farrah? Leave a text or video comment below.