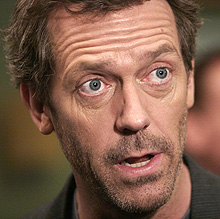 “House” star Hugh Laurie has revealed that he is battling depression.

The British actor flew home to London last week to reunite with his wife and three kids. He returned to the set yesterday, but told the Sydney Daily Telegraph this weekend that he was “drained” by the show’s success and missed his family.

Hugh, now one of the highest paid actors on television, also revealed that he continues to see a therapist periodically.