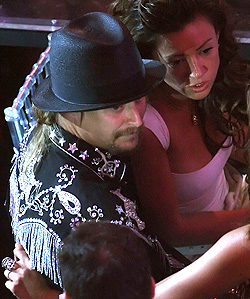 Kid Rock won’t be charged with battery following his shocking brawl at the Video Music Awards with Tommy Lee.

An official from the Clark County District Attorney's Office tells “Extra” today that they won’t pursue charges against Kid, real name Robert Ritchie. Chief Deputy District Attorney Ron Bloxham says, “It should be noted that Tommy Lee has requested that there be no prosecution relating to the incident and there were no injuries to either person."

Kid and Tommy shocked the audience at the MTV ceremony in September when they began throwing punches in the middle of the show. Lee was eventually dragged out by security, and Las Vegas police cited Kid for misdemeanor battery.

Both were once married to Pamela Anderson.