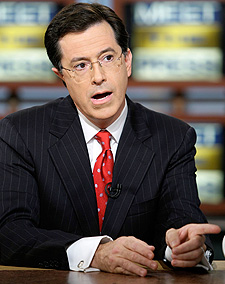 Comedy Central king Stephen Colbert announced last week that he was running for president, but his candidacy is no laughing matter - polls show he’s gaining ground with voters!

A recent Rasmussen Report national phone survey found that Colbert is preferred by 13% of voters over Rudy Giuliani and Hillary Clinton. In addition, a Facebook group titled “1,000,000 Strong For Stephen T. Colbert” has attracted more than 800,000 members – in just a few days. It’s reportedly the most popular political group on the social site.

Colbert says he’s running in both the Democratic and Republican primaries, but only in his native South Carolina.